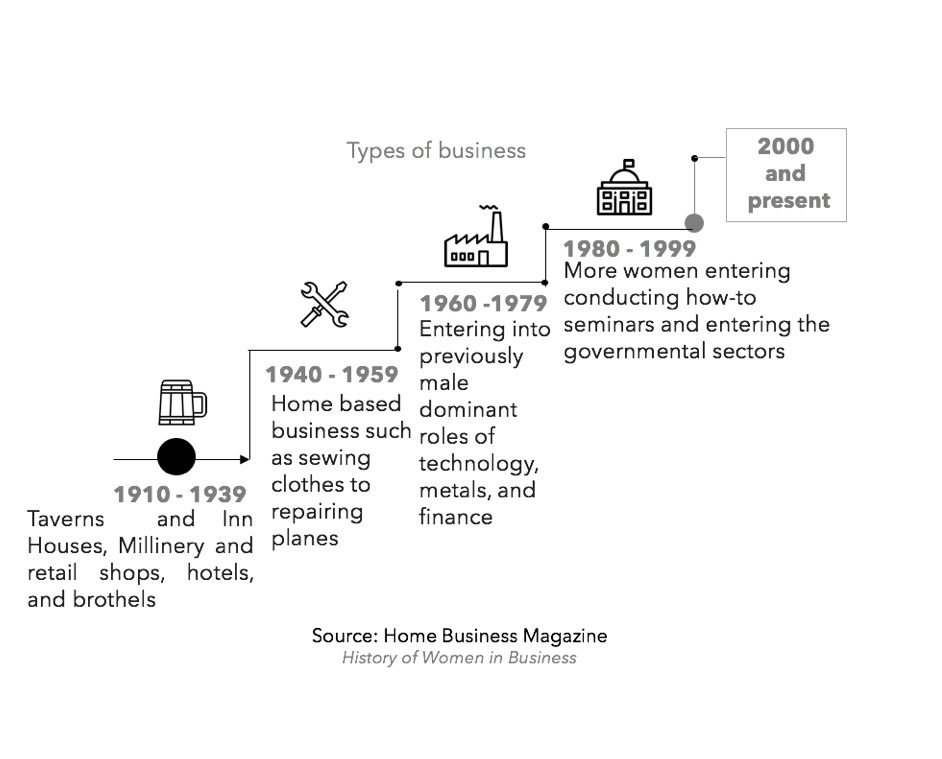 The defining characteristics of femininity although not universally identical, includes, empathy, sensitivity, caring, sweetness, compassion, tolerance and nurturance. These are traits that have carried traditionally until now. What does not change is that we are a daughter, a wife, a mother, a parent, a friend, an employee, and an employer. Simultaneously and almost all at the same time, playing to the different roles in the community. Economically, female entrepreneurship is estimated to help add US$4.5 trillion to Asia Pacific’s GDP by 2025.

The history of female entrepreneurship traces back to the beginning of the 20thcentury where feminism began to make a mark in the working industry. Women-owned businesses evolved over the centuries from 1910 to 2000 and present.  The World War II then marked as the entry of women into the once male-dominated industries. In honour of International Women’s Day (8 March), we dived into the celebration and opportunities of female entrepreneurs in this special month. And Grab Co-Founder, Tan Hooi Ling, who is part of South-East Asia‘s most exciting start-up. Grab today operates in 65 cities in seven countries, with its businesses anchored in transport and e-payments. The names of the women mentioned above are some high achievers who has made their mark in the 21st century and counting. In ASEAN, with a population size of 626.7 million people and a 400 million workforce, women entrepreneurs accounts for an estimated number of 61.3 million (9.8%) of the total population size from the ten ASEAN member countries. With female entrepreneurs occupying only 9.8% of the 626.7 million total population in ASEAN, Asia remains a highly impactful potential driver of development that is largely untapped — the women.

Taking a deeper look into these countries, we realise a distinguishing factor driving female into Entrepreneurship, which can be classified into those (i) driven by necessity or (ii) inspired by business opportunities:

(i) Driven by necessity: Philippines, Cambodia, Laos, Myanmar, and Vietnam

Amongst the countries, Singapore, Philippines and Thailand fall under the top ten markets with the strongest supporting conditions and opportunities for women to thrive as entrepreneurs. While regions with some of the highest percentages of women entrepreneurs are found in: Thailand, Indonesia, and Vietnam.

Here at BlackStorm Consulting, we look forward to the changes in the environment for women to effectively deliver more results. We look towards in anticipation of a deeper involvement of the government and companies, strengthened regional cooperation, ease of access of female entrepreneurs to a larger network and resources, as well as better financial funding. By being part of the ecosystem, we avail ourselves to bringing female entrepreneurs together and have a hand in shaping the thriving future of female entrepreneurship in Asia.

BlackStorm Consulting is a regional growth consulting firm specialises in innovative scaling and technology deployment strategy in Southeast Asia. We help organisations scale through our extensive knowledge in venture building, business transformation and crisis management as well as our wide network of industrial connections. We encourage innovation by maintaining an ecosystem for our stakeholders to communicate and collaborate. Our clients and connections are internationally present and range from small and medium sized businesses, corporate, to government agencies.

BlackStorm Consulting is co-founded by 2 female individuals, 鄭詩蕙 and 馬梅朵 together with 陳立涵 (Serial Entrepreneur and Advisor to digital asset companies moving into Southeast Asia).

BlackStorm Consulting together with other media partners, will be featuring articles on founding stories as well as the business challenges faced by professionals. Having identified the rise of female entrepreneurs, we would love to have you as one of our interviewees to share your experience with our group of readers. Contact us at: media@blackstormco.asia if you are keen to be part of the community.